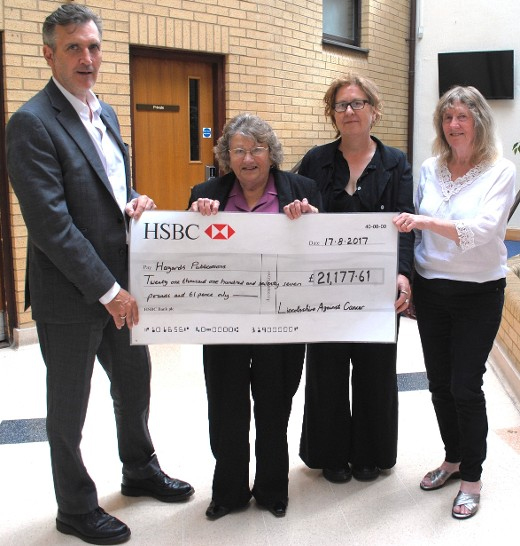 Half of all of us will get cancer at some time. Fortunately more people are living with and surviving cancer and work continues apace to speed up diagnosis and improve treatments.

Avoiding the causes of cancer in the first place should be a primary aim and some risk factors have been established – smoking and obesity, for instance.

Work is still going ahead to determine other cancer risk factors, some of which may be present in the working and living environment. And a 17-year initiative to raise funds for this work has resulted in a presentation of £21,177.61 to a team of researchers.

Cllr Maureen Dennis became involved in fundraising when she became aware of increased incidents of breast cancer in south Lincolnshire, assisting then MP Sir Richard Body to raise awareness and encourage research into potential risks posed by some farm chemicals, especially pesticides and herbicides used in rural areas such as south Lincolnshire.

Cllr Dennis has been working away for years raising awareness and funds and decided now is the time to hand the cash over. Her personal contribution has amounted to literally hundreds of thousands of cakes and pastries baked in her kitchen (often in the quiet of the early hours) and tonnes of produce from her garden and glasshouse sold at charity events. She said she was grateful to others who had made contributions and donations to the fund.

In the early stages of raising awareness a public meeting held in Boston by Lincolnshire Against Cancer, Women’s Environmental Network and PEX Action on Pesticide Exposure attracted an audience of almost 100 people concerned about the rising incidence of cancer, and the inadequacy of a national primary prevention strategy.

Sir Richard chaired the 1987 House of Commons Agricultural Committee which led to the report The Effects of Pesticides on Human Health (The Body Report). He campaigned tirelessly on the issue.

He congratulated Cllr Dennis for the work she had been doing and said “there wouldn’t be, in this little corner of England, an awareness of pesticides but for her. And that is very necessary; we are on the front line of this issue here.”

Professor Rory O’Neill, of the Occupational and Environmental Health and Safety Research Group, a coordinator of the Hazards Zero Cancer campaign – the Alliance for Cancer Prevention and the International Trade Union Confederation – and editor of Hazards online magazine, said: “A worldwide epidemic of occupational cancer is claiming at least one life every 52 seconds, but this tragedy is being ignored by both official regulators and employers. These deaths are not just statistics, they are stories of pain, hardship and bereavement.

“You would think it would be healthier living in the countryside, but this is not always the case. In this part of Lincolnshire cancer is bucking the national trend and is on the increase.

“This donation will help with evaluation of potential occupational and environmental risk factors for cancer, with particularly reference to breast cancer, in the Boston area and similar rural and semi-rural environments. It will be based on a combination of an historic industry/occupation profile, literature review and liaison with public health, local authority and other bodies as appropriate.”

There will be research in the Boston area to determine hazards, exposure and related health profiles, including participatory research/group interviews, preparation of resources to disseminate findings and recommendations, including reports and related online resources and liaison with local public health, local authority and health authority bodies about necessary action arising from the research findings.

Rory said there may be some challenges to overcome, such as accessibility of health and other data, whether there are language or other barriers to obtaining data and whether insecure workers will be reluctant to speak for fear of victimisation.

Phase 1 will be an assessment of these barriers and the production of a better-informed research protocol.

“One conclusion it is likely we will have to make is that rural and semi-rural communities are relatively poorly served by existing public health approaches and efforts must be made to develop more appropriate, tailored services.”